Dog Gravy To Sauce Up Your Dog’s Food

When Laura Alderman‘s elderly dog’s kidneys began to fail, a veterinarian advised the San Antonio resident to encourage her pet to drink as much water as possible. Increasing water uptake was no easy task until Alderman had a lightbulb moment: Her dog loved gravy. She watered down some commercial dog gravy, offered it to her dog, and the liquid was gone in no time.

Can You Give a Dog Gravy?

Enticing your dog to drink its water is just one of many uses for dog gravy, which is now prepared by leading pet food manufacturers.

Here Are Five Other Ways You Can Incorporate These Savory and Nutritious Gravies Into Your Dog’s Life and Diet.

Lisa Peterson, a well-known dog breeder and spokesperson for the American Kennel Club, says for some dogs, “Eating cold food out of a can is comparable to eating cold canned tuna straight out of the fridge: filling, but not very satisfying.”  To turn a ho-hum meal into a mini-masterpiece, add dog gravy to dry or wet dog food and microwave until just warm, or for about 30 seconds.

According to Peterson, changing foods and even flavors can be tricky. However, all such switches should incorporate a transitional period because dogs can be creatures of habit, not unlike humans and other animals. An easy way to maintain your dog’s diet while still adding a bit of new zip? Top your buddy’s food with gravy. Manufacturers are now offering dog gravies in such flavors as pot roast, bacon, and country chicken — enough to get the mouth of both you and your dog watering. (But dog gravies are specially formulated for canines.)

Your dog may go to great lengths not to take prescribed pills, but accepting a spoonful of yummy gravy is another story. “Just put a pill in the middle of a spoon and pour some gravy over it,” Peterson instructs. “Your dog will probably lap it up in one lick.”

While quality commercial pet foods are formulated to include just the right amount of nutrients, dog gravy can supplement them without disrupting regular mealtimes or adding too much fat. Look for pet gravies that contain 3 percent or more protein, 1.5 percent or more fiber, and moisture not exceeding 90 percent.

What’s better than a dog biscuit reward? A dog biscuit that has a bit of gravy on it says Peterson. Canines can connect rewards to positive behavior, as can humans. Humans note the reward’s quality and size; for example, if a friend does a little favor for you, you may reward him or her with a small gift, but if your friend goes all out, you may offer an even bigger gift. Use this psychology when adding gravy to dog biscuits during training, saving the extra yum-o factor when your dog earns an A+, or in this case, a biscuit plus gravy.

The Dos and Don’ts of Feeding Gravy To Dogs

Don’t ever feed gravy meant for humans to your dog. It often contains too much salt and could include ingredients, like onions, that are toxic for dogs.

Do select a gravy for dogs that is appropriate for your pet’s stage of life. Sauces are

often made specifically for puppies, adults, and mature dogs. Check labels to make sure you choose the right one.

Do store gravies for your dog in the refrigerator after opening. They will generally last for up to a month.

Don’t ever substitute dog gravy for an actual meal. Like salad dressing, gravy for dogs is meant to be an addition to food and not replace it. Once you start using sauces for your dog, you’ll likely find that they’re a handy staple. Alderman keeps a stash in her refrigerator for her elderly canine and her younger dogs, which now crave a bit of gravy each day. 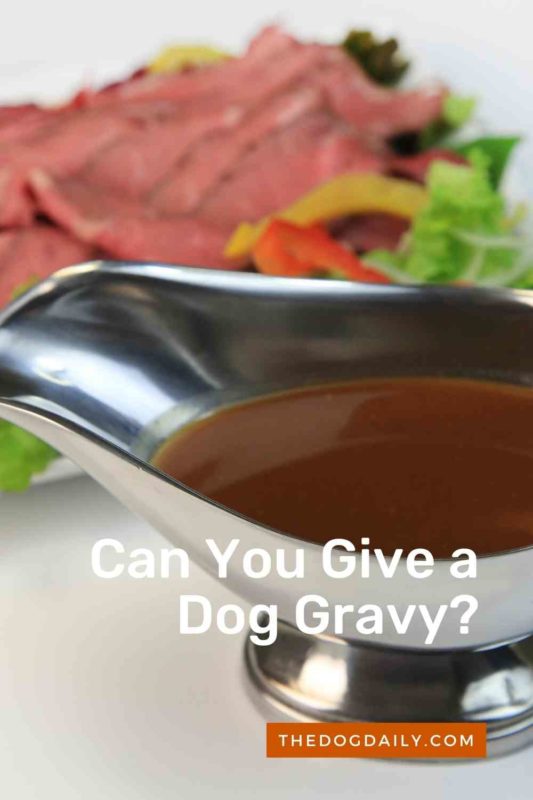